‘And they’re off!’– Emerald Airlines’ Inaugural Flight Departs from Donegal to Dublin, re-establishing Aer Lingus Connectivity to the North West of Ireland 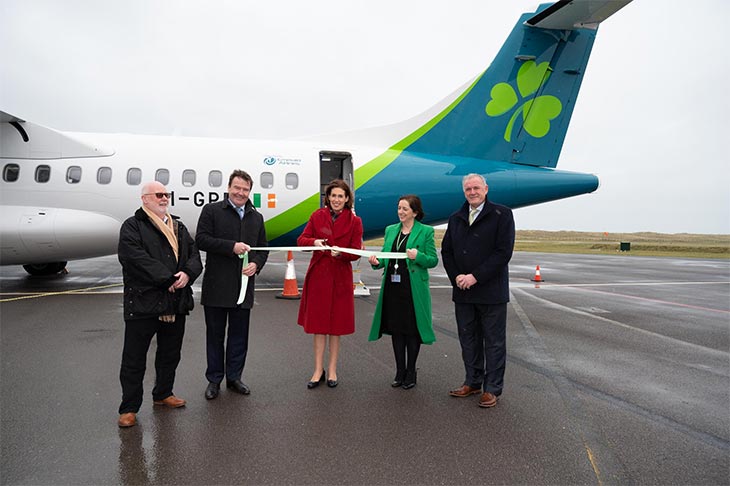 Commenting on the announcement, Conor McCarthy, CEO and Founder of Emerald Airlines, said: “Today marks a huge milestone in our journey to become Ireland’s largest regional airline. There has been a considerable amount of hard work behind the scenes in order to make this day a reality. I would like to thank all those involved; especially our amazing team at Emerald Airlines, our partners in Aer Lingus, Minister for Transport, Eamon Ryan, Minister of State Hildegarde Naughton and their team at the Department of Transport, and our friends at Donegal Airport.”

Only last month Emerald Airlines was selected as the new operator of the Exchequer funded Public Service Obligation (PSO) air route between Donegal and Dublin, providing an essential air link between the North West and Dublin in the absence of a motorway or rail network in the region.

With fares starting at just €29.99, Emerald Airlines will be offering up to 4 flights daily linking Donegal and Dublin with convenient flight timings and a record number of seats which enable same-day return trips to Dublin, and seamless connections on the Aer Lingus network from Dublin. Not only will this be a huge boost for travel between Donegal and Dublin, but it will also re-establish vital tourism connections to Donegal on the wider Aer Lingus network.

With further route announcements to be made in the coming weeks, Emerald Airlines plans to operate 360 flights per week across 12 routes with fares starting at €29.99.

Emerald Airlines will be operating the State subsidised Donegal-Dublin PSO route using Aer Lingus’ flight numbers and the Aer Lingus brand franchise with 72-seater ATR 72-600. This advanced ATR72 turboprop has a significant fuel burn and environmental advantage over all regional jets and turboprops in its class, emitting up to 40% less CO2 on short, regional flights.

For more information on fares and flight times, and to book visit aerlingus.com

*Available on www.aerlingus.com Sold each-way as part of a return trip. Subject to availability. Terms apply.