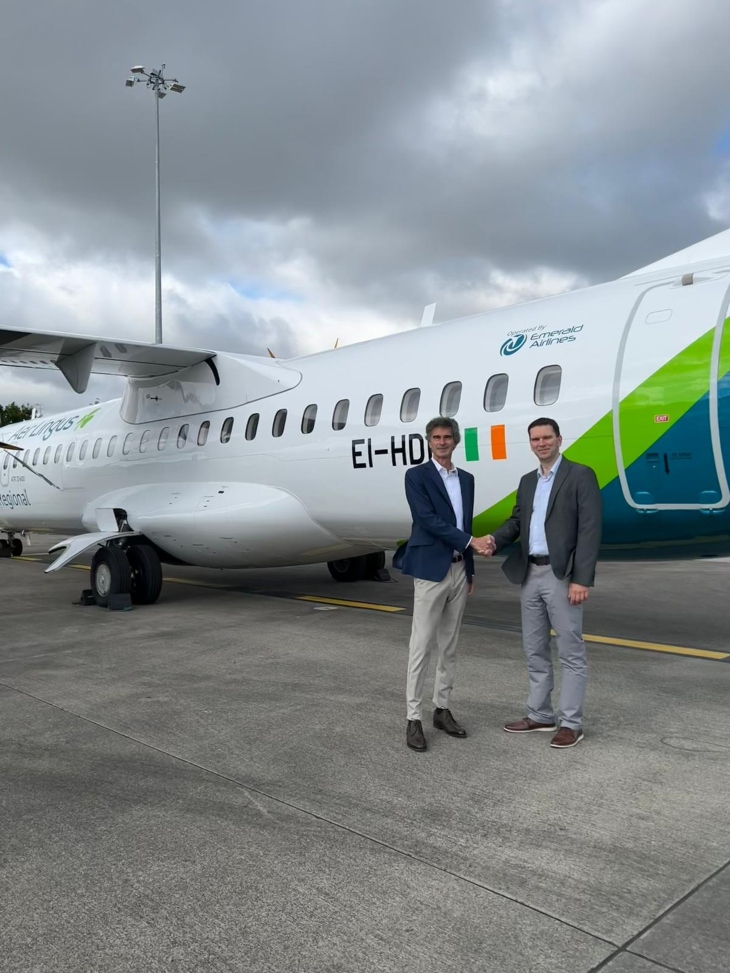 Emerald Airlines, exclusive operator of Aer Lingus Regional, celebrates a fruitful partnership with Falko (formerly Chorus Aviation Capital). The airline welcomes the delivery of the 6th aircraft as part of the lease agreement with the global lessor, entered in August 2021. From the 25th of July, the aircraft will join the airline’s Belfast fleet, re-enforcing the carrier's position as the largest airline based at Belfast City Airport.

Commenting on the announcement, Richard Spencer, Director of Engineering and Fleet at Emerald Airlines, said: “We are extremely pleased with the outcome of our partnership with Falko/Chorus. On behalf of the team at Emerald, I would like to thank our counterparts at Falko for their ongoing support.

The latest generation of turboprop aircraft combining unmatched environmental and economic performance, the ATR 72 has proven itself to be the right aircraft for our passengers and our airline, and has been a great asset to our company.”

With improved fuel efficiency and the lowest emissions of any aircraft in its class, all Aer Lingus Regional flights will be operated by the ATR72-600. The latest generation of turboprop aircraft combining unmatched environmental and economic performance, these ultra-low fuel burn aircraft emit up to 40% less CO₂ on these short, regional flights.

Mark Hughes, Chief Commercial Officer at Falko said “We are delighted to have delivered another aircraft to Emerald and be able to support the further development of Emerald Airlines as a key provider of regional connectivity between Ireland and the UK.

The ATR product is a core part of Falko’s portfolio where we now manage a diverse fleet of seventy-five aircraft making Falko one of the world’s leading lessors of the type.  In addition, Falko has two ATR simulators based in Dublin that provide further support to Emerald’s operations.”

Emerald Airlines is currently operating Aer Lingus Regional flights from Dublin and Belfast City Airport, flying over 540 flights per week on 20 routes from 16 airports including Bristol, Birmingham, Exeter, Edinburgh, Newcastle, Isle of Man, and Newquay among others.

Recruitment is ongoing at Emerald Airlines for positions in Belfast and Dublin. Further information on vacancies can be viewed here.