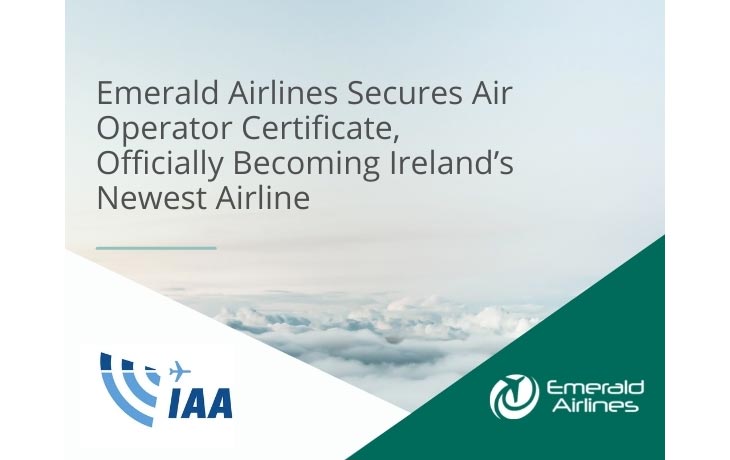 Commenting on the announcement, Conor McCarthy Founder and CEO of Emerald Airlines said: “Being granted the first AOC in Ireland since the pandemic is not only a major milestone in our journey as an airline but a significant one for the Irish Aviation industry as it begins its recovery following the worst crisis in its history.

We are now able to progress towards the launch of scheduled services, which will be rolled out progressively as our aircraft are delivered and market conditions allow. We will be working very closely with Aer Lingus on this now that we have our AOC in place.  I would like to thank all at the IAA for their invaluable support throughout this process.”

Speaking at the handing over of the Certificate, the Aviation Regulator of the IAA, Mr. Diarmuid Ó Conghaile, commented on the significance of a new Irish airline following an exceptionally difficult period for Irish Aviation over the past 18 months.

“Establishing a new airline and achieving all the necessary safety and licensing approvals is a huge achievement at any time. It is particularly challenging in the current pandemic circumstances, and we congratulate all of the team at Emerald on passing this milestone.”

“The emergence of Emerald as a new Irish airline is a big lift for Irish aviation and the Irish travel industry as we push to rebound from the catastrophic sectoral impact of the pandemic. We at the IAA are delighted to have another airline on the Irish register. This development demonstrates the flexibility and the potential of the industry here.”

Emerald Airlines recently announced that it has entered into a franchise agreement with Aer Lingus which will commence on 1 January 2023 for a period of ten years for the operation of Aer Lingus Regional flights. Although the contract is not due to commence for 17 months, Emerald Airlines continues to work closely with Aer Lingus to evaluate options with respect to an earlier contract start date.

Subsequently, Emerald Airlines has been assigned the callsign GEMSTONE and EAI as its three-letter designator by the International Civil Aviation Organisation (ICAO).